-Watch to learn more about the exploration mode

This Caudecus’s Manor dungeon guide for Guild Wars 2 includes basic info, a map for the location and strategies for both normal and explorable mode of the dungeon. Get your group to read this dungeon guide to assure yourself a smooth run through all of the objectives and boss fights in Caudecus’s Manor. 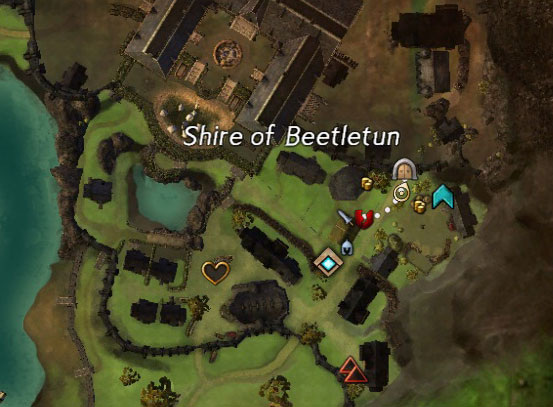 Quite easy. Takes 30-45 minutes.
Prototype Golem
Door Guard
Reviving Sigfast
Hunting dogs
Tree-house
Final boss
BackgroundThe heroes show up for a garden party at Caudecus’s Manor. The reason for the gathering is a meeting between the queen and a charr ambassador, and representatives of the other races are present, including Zojja. Logan is present as well, and suspects Caudecus of plotting something. Uzolan’s invention, a golem using asuran magic, attacks the party and kidnaps the queen and several of the ambassadors.

The adventurers must ask the party guests for clues, overcome Uzolan’s treachery, and rescue Queen Jenna from the human separatists who seek to destroy the human-charr efforts for peace.

Objectives and Boss FightsMeet Logan and the Queen in the Courtyard

This will start off the dungeon. Once you get to the courtyard you will be given more directions.

Talk to the guests and investigate the situation

You will need to talk to about a dozen party goers to investigate before the next part will start up. Split up and everyone speak with all the guests to move through this part quickly.

After you investigate the guests Uzolan will call upon his Golem to try and defeat you. He will randomly charge up an attack and shoot missiles out at you. When you see him charging up run away and dodge when he shoots. This will one shot you if you get hit so pay attention. If you do go down just respawn and run back to the fight.

Find the Separatist’s and rescue the missing party goers

There will be an energy trail that you can follow through the mansion. This will lead you to a few fights against the separatists.

Your first fight in the mansion will be against a door guard. He does a move similar to a thousand blades which you need to look out for. Move away when he does so. He also moves around a lot so it will be helpful to have immobilize abilities to make sure he stays away from the ranged classes.

Continue to the basement

After you defeat the door guard there will be a few mobs in the next room. They are not as powerful and you can AoE them down together. There are stairs that lead you to the basement of the mansion right next to the chest.

Once in the basement there will be more separatists to defeat. After doing so look for the glowing purple item on the wall in the back left corner. Interact with it and it will open a hidden passage.

There will be a Separatist Lieutenant guarding the next door you need to go though. Ranged players should stay back and set traps if you have them. You can kite him down the path until he is dead.

After this you will stumble upon a separatist mob that is plotting an evil plan. These NPCs are much stronger then some of the other mobs you have already went through so its important to have someone mark the targets and focus them down one by one.

Free the locked up NPC from the cage

At this point you will be outside of the mansion. There is a very large mob of separatists here so stay back and pull them slowly.  There are also snipers on the tower you should keep your distance from but once you are down to the Separatist Lieutenant you can have someone go up there and aggro them. After this you will free the NPC from the cage who will lead you to the queen.

Free the Queen from the Separatists

This is the last part of the dungeon and you will need to take down 3 separatists and Captain Delanie to free the queen. Leave the captain for last and she will try to kill the queen who will shield herself. This will let you easily kill the captain without being targeted.